I’m back with another fashion blog item! This is the lovely dress by my very talented and awesome friend Lilyanna, the owner of Cara’s Closet! The dress will be a part of the #InLove [Hashtag In Love] event which opens up on the 15th of February.

The dress itself comes with standard sizing and many mesh body sizes and there is even a colour changing hud to go along with it! It’s absolutely cute! It’s like she knew my weakness for dresses!

I gotta say, the sim I went to for these pictures is absolutely gorgeous! The buildings are amazing, the decor on the outside is stunning and just adds to the overall ambience of the place! I will add a link to it in the blog and if you get the chance you should totally take the time to check it out! Me and my SL hubby Apollo have gone here several times for pictures and they have always turnt out lovely!

It’s been a while, real life has kept me busy! Though I think things are mostly settling down now! And just in time! January is a busy month, lots of events going on! So, I am pleased to say I will more than likely have several blog posts coming up!

Now, let’s talk about this one! First off, my outfit is a mash up of things mostly gained from Luxe Box! If you’ve not done Luxe Box or heard of it I highly suggest you do! Sign ups for it start on the 1st of every month and run until the 14th until 11:59pm SLT. You pay a monthly fee of 1500 to join. Then, on the 15th of the month, you get a hud delivered to you which contains the 12 items you get for the month.

Next on my list is an item from ROMP. This is from Dictatorshop and it’s such a nicely made piece! It comes with several options for M/F, M/M/, F/M, and F/F options and the poses it has are smooth and well chosen! It’s perfect for Valentine’s Day fun!

Now, for what you’ve all been waiting for, my style details!

I’m back! This as been a rather productive week it seems! Here is yet another blog post for you all!

I’m back once more, sporting on of my various looks as you can tell! I spoke with Apollo the other day and both thought it was a good idea to try and get blog posts done on Tuesdays and Fridays, so with any luck, I will have at least a post a week or two if I can sort through the billions of clothes I have to find a good outfit!

Anyway! Let’s take a look at what I’m wearing!

It’s totally been way too long since out last blog post and I completely apologise! I just kept putting it off! I’m going to try to post more, probably on Tuesdays and Fridays as those will be free nights for me for the unseeable future!

Okay, moving on from that! Let’s see what I’m wearing today!

I have to say I am really fond of the KITJA outfit. I wear it all the time, to be honest. It’s great for chilling out, or if you want to just be sexy.

And what is in my background? Well, since you asked, Dust Bunny was having a sale, 50L’s or less on so many items… I just couldn’t help myself! I spent way to much there, pretty much bought everything there as there was no reason not to. I don’t have all the furniture I bought in the pictures, but I definitely have them up at my house. If you haven’t checked it out, I would. There are some total steals.

Rose Scribe here with another blog post, this time featuring some of the items from Luxe Box! I must say, I have been doing this since it came out and I have yet to be disappointed with the content, nor can you beat the price! Especially given the amount of content you get from it!

So without further ado, let’s see what I am wearing!

Many thanks for including my pics from the meetup!

The Second Life Inworld Meetup at Basilique turned out to be the mother of all events. We had a massive turn out that exceeded my expectations – 104 people at peak. Inara Pey did a lovely job of creatively reporting the happenings, and Huckleberry Hax shared a wonderfully introspective perspective on the day’s events. I don’t have much to add to their words, so I’d like to use this post to share my favourite photographs of the event, and perhaps a few suggestions for the future at the end of this post.

Xiola Linden kicked things off by saying: “This is a meet up folks – we’re just here to hang out and take pics – so I hope you have your snappers ready to take lots of pics and share them to flickr!”

Given the crowds, I can imagine it might have been a bit tough for people to even…

This weekend I had the pleasure of being photographed and post processed by the man himself, Skip Staheli.

Though I generally do not like overphotoshopped Secondlife pictures (most of the time they bring me to uncanny valley and freak me out), he is one of the artists who work with great taste and lifts the genre to a whole new level. I have to admit: most of his pics are pretty damn awesome.

So I won this opportunity through a photo contest, and was excited to see the result. I have to admit, I know I am raggedly handsome :), there was no surprise there :P. What I liked about the picture most is that he had put a camera in my hand, and placed me into a field which could very well be the location where I shot that contest winning picture. And this detail was, well for me this meant that he really liked my pic, and emphatized with the mood of the shot :).  I knew he did, but seeing the image done that way just… felt really good.

On Sunday I met Alenah, and we had some time for a few pics too, which we rarely have because when we meet…

Anyway, we had time for a few pics, which I have been planning for a long time now and I wanted to include them here too, as this could also have happened on the same day:

“The Shot” pose set by RoLu poses, the female poses come with the Argrace Akane hair.

The much-anticipated public casting for the Fashion Teller House has now arrived!
We are pleased to announce that we are seeking to add new faces and talents to our family of creative artists and stylists. We are looking for fresh faces with abilities in imaginative, outstanding styling. This means that we are not necessarily looking for the biggest names in the modeling industry. We are looking for individuals who are inspired by a theme and are resourceful and creative enough to be able to bring it to life through Second Life® fashion. You may be a model already, you may be a blogger, or you may be none of these, but if you have an incredible look and a flair for styling, we want you to become part of our team. 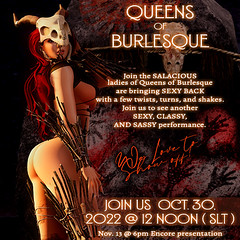